The steps and tips of delicious steamed dumplings

The steps of steamed dumplings(Jiaozi)

Step 1: Oil the bottom of plate to prevent the dumpling skin from sticking to the plate

Step 2: Only needs a cup of water to put in steam cooker

Step 3: Remember to set a steamer rack, then we can easy to take out the dumplings

Step 4: The steam cooker will finish after 10 minutes to 15 minutes.

Step 5: You can see that the dumpling skin is very swollen after the steam cooker finishes.

Step 6: After opening the pot lid, let the dumpling skin shrink. Cover the pot lid again, let the remaining heat steam it for another five minutes.

I really like eating dumplings very much. I gather many tastes and flavors of the dumplings I have eaten and share with you.

Frequently asked question and the tips of delicious steamed dumplings

How do you cook frozen gyoza dumplings with Boxed lunch? 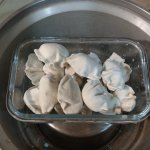 Oiling seldom olive oil in the bottom of the glass box, and spread the side of the box by a dumplings. After Layer the dumplings, cover the olive oil in the dumplins then cover remaining dumplings in the second layer and steam. After the steam finishes, let the box cool and put it in the refrigerator, you can get a delicious dumplings for lunch tomorrow.
(The reason for using the glass crisper is because it can be directly heat by microwave oven)。

How to cook dumplings in a Tatung steamer cooker? 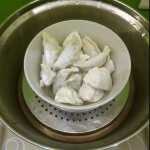 About a bowl of frozen dumplings (do not defrost), put two cups of water and wait about 10 minutes after th steam finishes. Prepare about a dozen frozen pork dumplings. It is better to steam them in a bowl than in a plate and take them out of the Tatung steamer cooker. (Cream the bowl with olive oil to avoid dumplings sticking to the bowl.)

What is the secret to good dumplings?

Frozen dumplings do not defrost, use a cup of water in the steamer cooker for 10 minutes, open the pot lid and cover the pot lid again. Wait for another 5 minutes and take it out of the  steamer cooker. You can see more detail steps in this article about The tips of making delicious steamed dumplings(Jiaozi) by using a steam cooker within 15 minutes

The reason of the dumpling skins are hard after steamed

The secret to the deliciousness of steamed dumplings with steam cooker

This site uses Akismet to reduce spam. Learn how your comment data is processed.